(The image has been distorted and deep fried in order to avoid copyright. ) 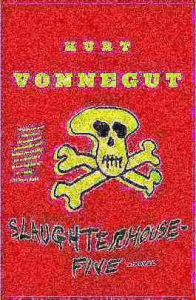 egan reading the book “Slaughterhouse-Five”  by Kurt Vonnegut. I haven’t read too much of it but based off what I have read, the tone is what sticks out the most to me. This book is supposed to be about the firebombing of Dresden late in WWII, where 135,000 Germans lost their lives. Despite this, the author keeps up an ironic half-joking tone, almost akin to dark humour. For example, he shares a personal story of how he planned out the story on the back of a roll of wallpaper using his “daughter’s crayons, a different color for each main character. One end of the wallpaper was the beginning of the story , and the other end was the end”. Each character was then represented by a line. “The destruction of Dresden was represented by a vertical band of orange cross-hatching, and all the lines that were still alive passed through it, came out the other side”

I thoroughly enjoy this style of tone. Although maybe that just says something about me as a person. In any case, I find the irony behind deciding whether characters live or die with children’s writing utensils to be rather refreshing. Especially when dealing with heavy subjects like an entire city being reduced to flames and rubble. I hope to see Vonnegut continue this tone through the rest of the book.

One thought on “Crayons and Corpses”